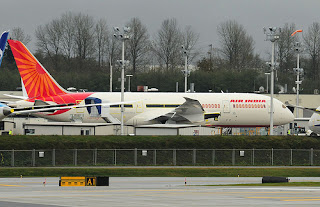 Media Reports are full of the news that:  “Melbourne will be the first Australian city to receive scheduled 787 service when Air India deploys the aircraft on its new Delhi-Melbourne route in October.” (Flightglobal.com).

Seeing that’s my home city, I took an interest.

Context first: This news came amidst celebrations accompanying the touchdown of a 787 at Indira Gandhi International airport in New Delhi. Air India has 27 of the planes on order and got $45million in compensation for their delayed delivery (three years now). Air India is the number two customer for the 787 after Japan’s ANA.

In an article in the Calcutta Telegraph an unnamed Air India official said  “Direct flights to Australia are the top priority for us. The route will be profitable for Air India and is a key ingredient of the turnaround plan,”
The chance of an Air India Boeing 787 flying from Melbourne to Delhi in October is as likely as a flying elephant or magic carpet doing the same route that month! Or as we say in Australia: “pigs might fly“

If I am wrong on this, join me at Melbourne airport between October 1 and 31. I will be the guy with a magic carpet, a flying elephant and an Air India 787 ticket.