This is the last of my posts on Brasilia, Brazil. My first was an overview of mindbogglingly fascinating planned city and would be worth reading before or in conjunction with today’s post. The others are listed in yesterday’s post.

Many people I spoke to stated that Brasilia was built for the car not the pedestrian. This is not strictly true. The designer’s intention was that people and cars would be separated giving people safe spaces to walk in and cars few restrictions eg few pedestrian crossings. The idea is that between the city’s sectors, people would drive (or be driven). Once in a sector, they would walk along distinct walking routes.

Make it easy for people to walk Between Sectors

Walking between sectors is almost impossible. I think this first video fascinatingly illustrates this. The Hotel Diplomat and the Econohotel are about 600 metres apart. One is located in the Northern Hotel Sector and one in the Southern Hotel Sector. To safely and legally walk between them requires a 2.3 kilometre walk.

Give People logical and short Walking Routes
The Walking routes that have been laid out for people in Brasilia are not the shortest. This video  shows an example of this outside a shopping mall. To cross the road to the mall legally means a diversion of at least 400 metres in total.

This aerial shot of Brasilia from the Blog Discovering Urbanism shows the massive network of unofficial paths that criss cross the open space so people can get to places faster. 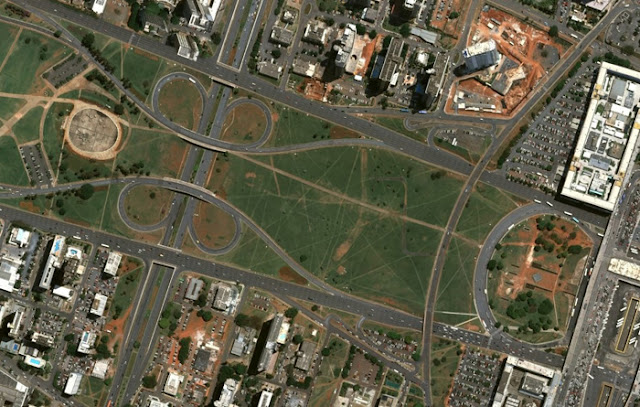 Street Life Helps make a City
It was uncanny at times to walk around this city and not see another pedestrian. There are very few cities in the world that have no one in the downtown walking. These three shots show some interesting contrasts. The first shot is of the street. The second is of an aerial walkway connecting two shopping areas over the Bus station. The third is the shopping centre interior. Where are the people? The shopping centre can be accessed by car, subway and bus but not by foot. I tried it and its not easy. 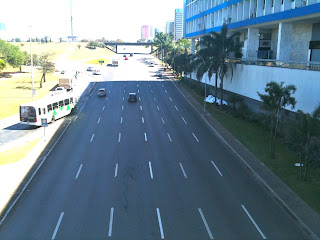 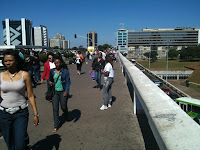 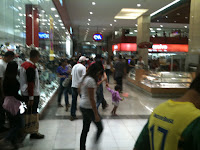 Show People Where to Walk
I have already mentioned in a previous blog that many of the the walking routes are not clearly identified. They need directional signposting, maps and other clues that you are heading in the right direction.
Create Safe Pedestrian Crossings to Protect Pedestrians

The pedestrian accident rate in Brasilia is five times higher than the US average. One of the reasons is the way Pedestrians have to negotiate roads. There are four types of Pedestrian crossings in Brasilia: