How many people really care what aeroplane they are in?

I do care because I sit in two planes a week, on average. These planes are my favourites:

The plane I have recently fallen in love with is the A380, the world’s largest passenger plane:

Today I compare the flying experience between these three airlines. Sadly only in Economy. Sponsorship is welcomed to try the First Class product with all of them!

Emirates check in was astoundingly efficient considering there were three flights departing Auckland in a short time period -one to Brisbane, (B777), one to Melbourne (A340) and the A380 flight to Sydney. This means a potential check in number of a 1000 passengers. Plentiful desks and hired contractors directing passenger traffic made the experience easy. It took me less than six minutes from the time I joined the queue to the moment I was holding my boarding pass.

This matched the Qantas check in (9/10) and was faster than the one at Singapore Airlines (8/10).

I was curious to see the reactions from my approximately 500 fellow as they  filed past the plane. Just five of us stopped and took photographs of the 569 tonne monster (pictured above) Forty or fifty gazed, pointed and chatted displaying an excitement about flying the 22 wheeled Double Decker aluminium “Super Jumbo” aeroplane. Some were more nonchalant, barely glancing at the plane as they headed to the Boarding gate.

A very large number were clearly caught up in the excitement of the journey – just happy to be travelling. The type of plane seemed irrelevant in this situation. We had two large groups -a large Kiwi young rugby player contingent and a Chinese tour group on board.

A few slipped nervously on board, obviously dreading the hours inside the 73m (239ft) long metal tube. Can you believe the the Wright brothers first flight was only 37 metres (120 feet) long? In other words this plane is almost twice as long as humanity’s first ever powered flight. One would love to see their faces if they ever came face to face with this plane.

Boarding was also efficient -and fast. The welcome aboard by the on board crew was astounding. The Qantas welcome on the A380 had been up to the usually Qantas friendliness but didn’t quite match Emirates (9/10).  I generally find the Singapore Airlines “welcome aboards” a little false and forced. (7/10 ). With Emirates the ethnically diverse crew members greeted you in a way that seemed personal, unique and genuine.  It may not seem much but this contact reminds the passenger that they are special and are involved in the special experience of flying. I know many Airlines have reduced flight to that of a bus to the detriment of the flying experience I believe.

My seat was 81K. This seat together with 81A and 68A and 68K  are the best seats on the Emirates plane. Located in the emergency exit, they have no seat in front of them. Thank you to my friend Brett for this tip.  On this plane I had two very fun women sitting next to me in my row -thanks for a great flight!

A gentleman seated a row in front of me was a different story. When I arrived at the seat, I found that the very large luggage bin above my row, was a disaster area with bags badly packed and a couple trying to shove lots of bags on top of the other bags in the bin. The couple were oblivious to contents or fragility. I suggested to them, we repack which they accepted. The repacking was a success! We got all the bags into the luggage bin including mine. I made sure that small bags were on top of big ones. As I did this, I asked who owned a blue bag that had been in danger of being squashed under an avalanche of duty free. I wanted to get the owners permission before I moved it. The owner, seated in 80J, who had been watching this activity yelled at me threatening me if I damaged his bag in any way, he would be very angry. I pointed out to him, I was saving his bag and that a polite thank you would have been better. He looked at me and was suddenly chastened when he realised he was out of line. He didn’t say much for the flight.

Pre -flight inspections by crew were through and efficient. Safety briefing is only done over the TV monitors with the crew standing by. I prefer the way Qantas engages their cabin staff in the safety brief (9/10). To me it lends an air of seriousness –that the airline really knows its safety stuff. Singapore got 8/10 for this when I flew their A380. 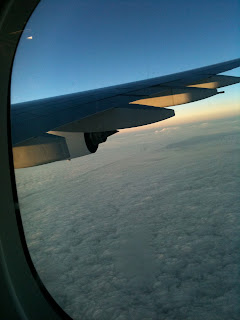 Takeoff on the A380 is incredible. Firstly it is so quiet! There seems to be no dramatic roar as the plane moves down the runway. Then the plane seems to simply glide up. The 380 feels like it wants to fly and is simply going back into the atmosphere where it belongs. 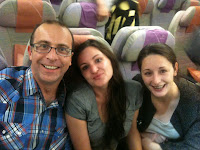 It is 40 years since the original jumbo started flying. The advances in air technology since then have been amazing. The A380 is a massive improvement over the 747. For example the A380 produces 50% less cabin noise than the currently flying 747 models and has greater cabin air pressure which makes travel more pleasant. The windows are larger. The bins are larger. The cabin is wider and higher.

And of course more people can be flown for less fuel. While Emirates has two versions of the A380: One with 516 seats and one with 489seats. However, Air France crams in 538 people into its A380 in three classes. Lufthansa reduces that to 526. Singapore has opted for 471 seats and Qantas has only 450. NB The overall capacity of the plane is 853 passengers. One airline has said it will aim of 840 seats when it gets its A380 (Air Austral). Ryanair would probably aim for 1000! The feel of all three A380s I have been on has been of incredible spaciousness.The Lavatories on the Emirates are real class with wood panelling and nice moisturisers etc! Tip: use the ones in the front of the plane. Most people seem to congregate down the back of the plane. 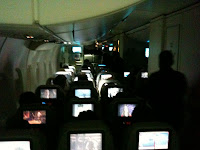 I found the Emirates ICE entertainment to be clunky and slow to navigate compared to their counterparts on Qantas and Singapore.
One of the groovy features with Emirates, however, is the cameras they have built into the nose and tail of the pane which allow you to watch takeoff and landing from any direction -although the woman next to me and I decided : “it would be not a nice sight to watch your plane crash“. 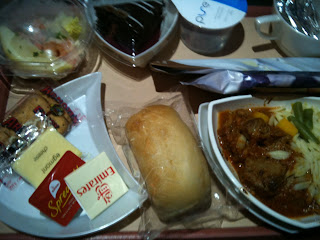 The Emirates meal was amazing. In a world where airline meals in Economy have declined or diappeared, Emirates seems to believe that giving a quality product may attract repeat business! The meal consisted of:

Contrary to a popular mythology,  Emirates is not a dry airline on most sectors, so wine was available with dinner. (Flying into Iran and Saudi Arabia is a different matter).

Our landing into Sydney was bumpy (we had been forewarned) with rain, wind and low clouds. We felt very secure in our seats as the plane bounced through the cloudbursts.

My seatmates and I decided that the Emirates Airbus A380 is worth going out of the way for. So my A380 Ratings:

In July I complied my list of Top 21 Airlines I have flown. When I revise the list, guess who will be the new number one?

Thanks to my fun seatmates, Emirates and the cabin crew for a great trip
« Previous Article
Next Article »