My flight with my 70th airline (LAN Chile) almost came to blows in the Check In line.

I get to stand in the priority check in queue because  of the curse/benefit of having flown too much! When I arrived at Auckland, New Zealand airport for my 430am Check in for  Sydney, I went straight to the Priority Line. As I stood there,   I observed the man in the regular line was eyeing me carefully. When the check in clerk gestured to me to move forward, he was off! He roared across with his luggage trolley, narrowly scraping in front of me. The check in clerk gestured him to stop and waved me forward again. He kept zooming up to the counter glowering at me the whole way and demanding attention from the check in staff. Suffice to say, the clerk refused to serve him. He looked ready to punch me out as he slunk back to his place in the line.   I could feel his eyes burning holes in my back as I checked in!
Air New Zealand handled the check in on behalf of LAN. I appreciated their initiative in getting me an exit row seat. What was even nicer was that they seated me alone! (after defending my place in then line!)

Being an airline from a Spanish speaking country, the crew were bilingual. They greeted each passenger in Spanish and/or English. I decided I would go Spanish! Every member of the crew from front door to my seat welcomed me! 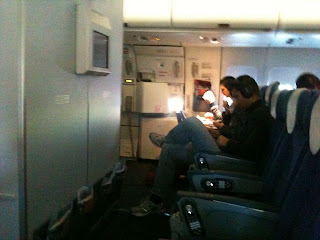 The LAN plane was an A340 which I love. Its a great plane. Almost as nice as the A380. It feels roomy (especially in 25A exit row!). My only two negatives with my seat were:

Safety briefings included the crew standing silently while a cute cartoon briefing played. It was very well done.LAN appeared to take safety very seriously and their pre safety checks were quite thorough (compare to Uniteds’ slap dash approach I blogged about a few weeks ago)

The pilot made his announcements in English and Spanish and wasted no time in getting the plane into the air. It was a superb take off on a grey morning 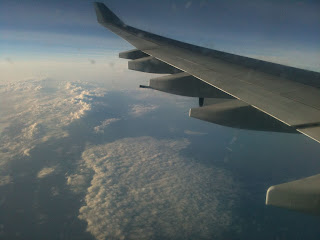 Breakfast was fresh fruit, a very fresh ham and cheese croissant and carrot cake. It was presented well and sufficient for this short flight. Alcohol (from Chile) and non alcoholic drinks were freely and generously available. Cabin Service was warm and friendly from all crew. 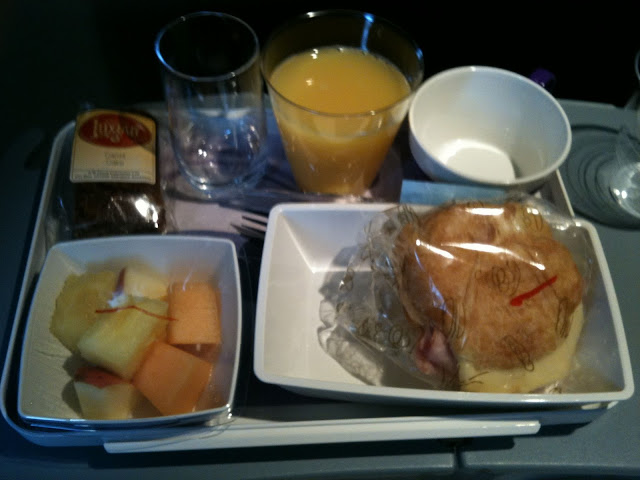 I would fly with LAN again! I just hope check in is in the afternoon -and there are no pushy men at check in!

Línea Aérea Nacional de Chile – now Lan Chile is one of the oldest airlines in the world. They operate flights across Latin America, to North America, Europe and the Pacific.