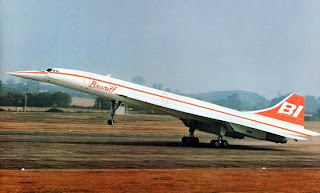 Have a look at this amazing video from the now defunct Branriff International. They revealed their image of what  flying in the future would be like in the supersonic age.

There are some things that have happened but many that have not eg supersonic jet? electronic valet on board?

What was it with people in the 1960s -they didnt want to do any walking?

Did you see the onboard entertainment meant you could watch three films at once?

When you have that as context you wonder how much of this contemporary video from Lockeed about flying in the future will happen. Ah it sounds so wonderful;

etc etc
Didn’t say anything about what the seat and meal will be like? Even Lockheed have some limitations.
What do you think the future of flying will look like? For me, fewer airlines, more expensive tickets and a massive interest in non petroleum based fuels.
« Previous Article
Next Article »