The flaps on the mighty beast were fully extended. Moving onto the runway, the familiar roar of the four 747 General Electric engines came to life. Rolling down the runway, we accelerated slowly, leisurely using a huge amount of runway, before climbing smoothly and steadily out of Melbourne (Tullamarine) Airport. The climb was gentle and we turned almost casually over the farmlands north of the airport before executing a neat turn to head toward Sydney, the Australian coastline, the Pacific Ocean and Los angeles International airport (LAX)

I say “familiar” because this was my 93rd take off in a 747. Collectively in 747s I have travelled about 19 times around the earth or the same distance almost to the moon and back. I bet the astronauts would have liked something that big to fly to the moon in but they may not have wanted to share it with 400 other people for that trip!


This flight was different though because it was my 747th flight of my life. I was very excited to organise my 747th on a 747 with Qantas!  I had managed to get my 737th flight on a 737 with the all 737 airline Southwest.
For me choosing Qantas for my 747th flight was significant as they are the airline who for six years were the world’s only all 747 airline.

I have travelled with Qantas 234 times (41 of them in jumbos) to five continents.  Today’s flight was back to the USA but marked the beginning of a journey which would end in Brasilia, Brazil, South America thus adding a sixth continent to my travel collection.

Check in, customs clearance and security at Melbourne airport took less than 20 minutes. There was a queue of older people in wheelchairs being pushed through the express immigration line which slowed things a little.

The Qantas First lounge staff welcomed me with interest and congratulated me on this goal. They asked me how I came to know all of my flights and I explained about my Flightmemory (watch for future blog).

Boarding was relatively calm with quite a light load- I would say the plane was less than 2/3 full. Seeing the flight the day before was full, that was a surprise.  I was in the bulkhead in the very front row of Economy (row 52) in a window seat with an empty middle seat. The arm rests in this aisle cannot be raised (a fact that the check in staff did not know until I told them and they checked). This limits any ability to stretch out into that empty seat -still its good for storage and the leg room in that row is always appreciated.

Our plane was VH-OEH (named Hervey Bay but not displayed on the plane). 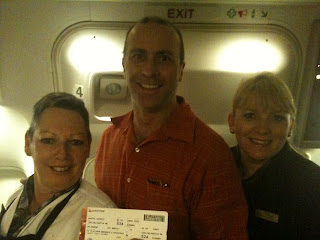 Marika on board (pictured right) extended the congratulations with a welcome aboard champagne. Thank you! The service was the good old style Qantas service with a very experienced crew efficiently discharging their duties in a friendly fashion. Lunch was served as we flew over Sydney’s Botany Bay.  I chose Portuguese chicken for the main course.

After lunch, came an ice cream and then the little snack bag that tides passengers through the night. Quelle Horror! Qantas has reduced the contents of the bag! I could not work out which item has been removed but there was a lot more empty bag!

I really appreciated the extra service and attention I got because of this being flight 747. I ended up getting three Boarding passes for my souvenir collection including one with a highlighted Happy 747th!  One of the Boarding passes was signed by the Captain who I met upon our Los Angeles arrival.

Takeoff was delayed by paperwork issues but we had a fast crossing because of strong tail winds which means we touched down into LAX ahead of schedule. I was moved to business for the very smooth landing where I sat next to new Australian Dancing with the Stars Judge Josh.

On Q, the on board entertainment system worked well although after V Australia’s system, it feels a little more clunky. Still it is way better than the non existent system, United has on this sector. 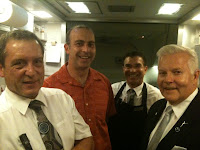 I am glad I did this flight. For a plane geek and a traveller who flies about 100 times a year (about 8 times a month), to celebrate my 747th on a 747 was indeed an early birthday present. Thanks to Captain Thoroughgood, and his pilots, John, Marika and the on board cabin crew and First Class lounge staff for making it such a memorable flight.

Getting onto the 747 for my 747th proved to be more problematic than  I had expected. I originally booked QF 25 Auckland to Los Angeles, not realising that Qantas had changed the plane on that sector from a 747 to an A330, a timetable change that I had missed. That was not going to work! I contacted Qantas Customer Service to see if they could shift my flight onto a SYD or MEL-LAX 747. “No can do“- Qantas Customer Service didn’t share my “enthusiasm for my aircrafts” and told me to call the usual call centre. My bad but I thought the flying Kangaroo might have tried to accomodate my unusual request. The staff at the Qantas call centre who were very friendly and determinedly helpful,  found that making that change would cost more than a new flight. So I moved QF 25 to another date and made a completely new booking for this auspicious 747 occasion. Thank goodness I fly a lot.

I then had to change that new booking to a different date so incurred some change fees. The booking agent who made the change assured me that I was on a 747. Imagine my horror to learn that the actual equipment was an A380. Don’t get me wrong, I love the A380 but that defeated the point of 747 on a 747. More change fees! Slightly annoyed because I felt these change fees were unjustified due to being given wrong advice. My final trip date was shifted because of a family emergency but we got there! 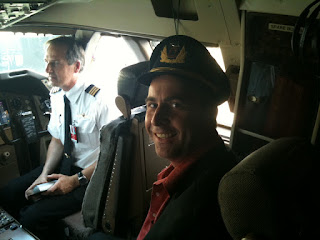 Rating for this flight? 94%- slightly higher than my average Qantas rating! Even customs at LAX was good!

In ten flights time, will be flight 757 – and you guessed it, I am booked on a Boeing 757. The trip is a domestic USA one. Four US domestic airlines have 757s: American, Delta, United and USAir. Guess which airline I am flying with?
« Previous Article
Next Article »