Virgin Blue is no more. After 11 years affixing the sides of planes across Australia, Virgin Blue. Pacific Blue and Polynesian Blue are all becoming Virgin Australia in the worst kept rebranding “secret” (was it meant to be a secret?).  I love the new TV ad:

First some history. For many years, Australia had a very cozy duopoly between two domestic airlines: Trans Australian Airlines (TAA) and Ansett. TAA became Australian Airlines and then merged with international airline Qantas.  Ansett was bought out by Air New Zealand who started with a small shareholding and grew that holding.

But there still remained just two major airlines across Australia with some independent regionals and an occasional brave smaller  competitor (East West, Compass, Impulse). These two airlines copied each other. When one started a frequent flyer program, the other copied it. One opened business lounges and the other copied it. All the time they wrestled each other for control of the lucrative business market.

In 2000, Richard Branson launched an attack on this cozy duopoly with Virgin Blue as it blazed into the market with discounted fares. The ensuing fare war between Ansett, Impulse, Virgin Blue and Qantas plus September 11 and a myriad of other issues led to the takeover of Impulse by Qantas and the collapse of Ansett. Australia lost its second carrier. Virgin nabbed the liesure market taking passengers from trains and buses and Qantas got the lions share of the business traffic.

Fast forward back to May, 2011 then.  There still remain just  two major airlines across Australia with some independent regionals and a smaller competitor: Tiger. These two airlines are now copying and trying to trump each other eg  frequent flyer programs, business lounges etc,  wrestling each other for control of the lucrative business market.

In the battle ahead,  am curious about fhree things: 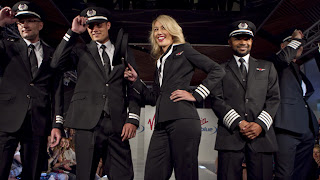 1. Are Virgin Australia gambling too much?  Virgin Australia are having to spend to make themselves more visible.  New logo (which I think is underwhelming), new uniforms (which I love), new ads (see above), new A330 planes, new Business and new Premium economy. Their Lounges are shifting from a trendy hang out to a serious business environment.  Thats all costing money. They need to generate return soon. As well as a major change process and the new battle with Qantas , there is the escalating fuel price environment. The airline has already warned of a loss this year of $30 to $80m million.  Shareholders have marked the airline down by about a third this year.

2. Why Virgin Australia and not Virgin Pacific? 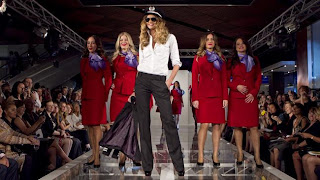 3. What will Virgin do alliance-wise? Qantas belongs to One World. Ansett were the Star Alliance partner in Australia. Now Star along with Skyteam have a big gaps in Australia.  In the meantime, Virgin Australia have formed their own major relationships with:

No doubt all three would want to keep on wooing Virgin Australia. Delta and a middle eastern airline (Emirates? Etihad?) are both rumored to be interested in Singapore air’s 49 per cent holding in Branson’s flagship airline: Virgin Atlantic (he owns the rest). If one of those lines got that stake, then that might influence which alliance Virgin moves closer to.
In the meantime, I am looking forward to my Virgin Australia premium economy flight from LAX to SYD Saturday (flight #742 in my life)
« Previous Article
Next Article »