In the TV Sitcom Big Bang theory, the main character, Sheldon, is asked by Rajesh to imagine himself in the one place he feels most at home:

He replies: Simcity -or more specifically the Simcity I designed Sheldonopolis.
Rajesh: OK you are in Sheldonopolis
Sheldon: Where exactly? Sheldon square, Sheldon Towers, Sheldon Stadium, home of the fighting Sheldons….”

I wonder what would happen if we indeed stepped into a Simcity creation? Here you go: 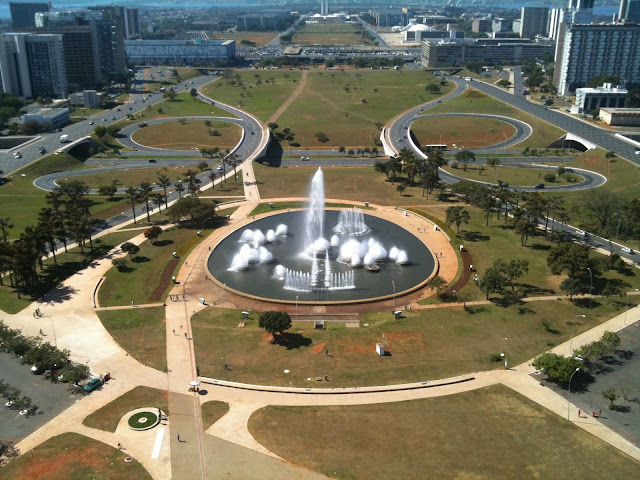 For me visiting Brasília, the capital of Brazil a city planned and built in the late 1950s, is akin to visiting a Simcity creation brought to life. Wide avenues, treescaped vistas, monumental buildings, extensive parklands and strict height restrictions, one could almost see the Red, Blue and Yellow coloured squares of the Simcity game board.

You know what? I like this real “Sim City“! Although I want to see more added to the City of Brasília (more on that later)

Today’s blog post is largely about the design and construction of the city – and my reactions to it- good and bad. Check out other posts  on my Apppraisal of Brasília, and on being a tourist there. I also dedicate a post on the very famous Oscar Niemeyer key buildings. Today’s will probably be a long post as I am using this to understand this city -theres a lot to say. If you are interested in city planning or very different tourist locales enjoy!


Design Competition for Brasília
To choose the design for the new capital, a competition was held in 1957. Interestingly, the city was already under construction. 26 competitors submitted 41 projects. There were four shortlisted entries:
1. The winning entry by Lucio Costa which aimed for a population of 500 000 (see more below)

3. Rino Levi  proposed a city with 16 super towers (above) in six sectors. The 75 to 80 story towers would have accommodated 288,000 people out of a total city population of 500 000! Each tower would have been a kilometre or less from the downtown, so the intention was most people would walk “on a larger scale than in other cities  -increase the contact among the population“

4. Marcelo and Roberto Mauricio suggested my personal favourite: -Seven to 14 circle-shaped “urban” units each with a 2km diameter was planned with 72 000 people. Each unity would be “a complete city” where people would live next to their working place, so they would mostly walk. Total city population: 630,000 to  1,260,000. Their failure: to actually include space for the National Capital buildings!


Costa’s Brasilia – the one that was adopted


Basic Structure of the City 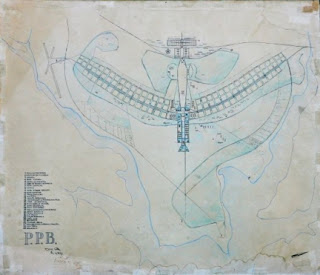 From the sky the plan looks like a bird-many have suggested it was designed like an aeroplane-something Costas refuted: “Nonsense…That is ridiculous. That’s an acceptable analogy, but it would be total imbecility to make a city in the shape of an airplane.”

The wings of the Bird run North-South (North is to the right). These were designed to be the residential districts of the city. The bulk of the residences were built along a radial arterial road with fast central lanes and side lanes for local traffic

The East West axis (the head and body of the bird) is known as the Monumental Axis. East is where the “tail of then bird would be” Along this axis are the government buildings and the cultural, entertainment and sporting precincts.


Centre of the City
The city consists of two main axes crossing at right-angles.  At the intersection of the two axes the bus station was placed and around the the intersection were the banking, shopping, hotel and commercial districts and the entertainment center of the city, with  cinemas, restaurants, etc. This means everything in the hotel sector is a hotel and everything in the banking sector is a bank!

Monumental Axis- The East -West Axis
At the Western end of the East West Axis (left of the axis on the map) was planned to be the main railway station (which actually was an interstate bus station before it recently moved).  Running east along the Monumental axis are  sports grounds, Municipal (city) services and the TV tower. The large park on the Southwest of the Monumental Axis is City Park which is bigger than New York’s Central Park:

At the other end, the Eastern end (Bird tail) is a vast square called Three Powers Square around which are arranged the three key power centres of Brazil: the Supreme Federal Court, (National Congress and President Palace (Palácio do Planalto).  More on the buildings Thursday next week.

Moving west from the Three Powers Square along the Monumental Axis are the offices of the Brazilian Government Ministries which look like two rows of dominoes- each with a private parking area.

For the next kilometre from the Ministries to the Central Bus station are the Cathedral,  museums, library, planetarium all in a park like setting.

The Monumental Axis itself consists of a long mall. In the middle of the Mall are broad sweeping lawns intended to be used by pedestrians and parades. On each side of the mall are two carriage ways of six lanes each. Urban legend has it that this is the widest road in the world. Not so. It does according to Guinness Book of Records have  the widest median strip in the world. 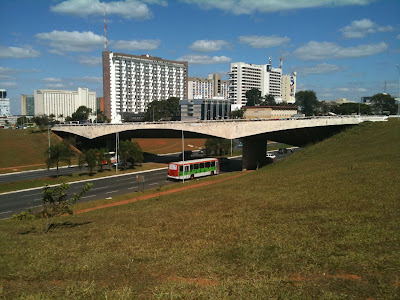 Costas envisaged taxis and buses for public transport even specifying the colour of the taxis (grey with green stripe) and the uniforms of the drivers. 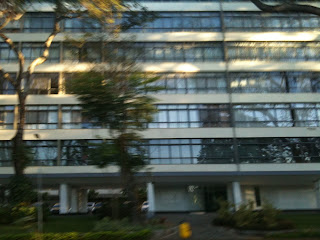 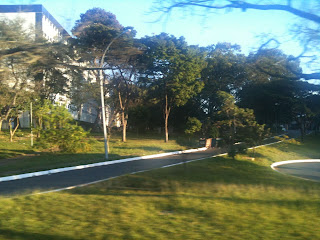 The local Church and secondary schools were placed in the middle of the superblocks. Shops and cinemas were included in the Superblock structure. All cars were parked at the front and residents would walk between schools, shops, church and residential buildings.

The superblocks were known by numbers, the residential buildings by letters in relation to the entrance to the superblock. An address would read, for example, N-S3-L, apt. 201. Costas believed that these superblocks would eliminate “undesirable class distinctions”

Other Housing
Isolated residential districts surrounded by trees and open countryside were sold for single family homes The lakefront was not to be developed for residences with the exception of the President’s house, to preserve the lake’s beauty

Criticisms of Brasília
Critics of the City are vicious:

I think some critics are too harsh. Everyone who lived here that I talked to was very proud of their city. It is a city though you need to adapt to. 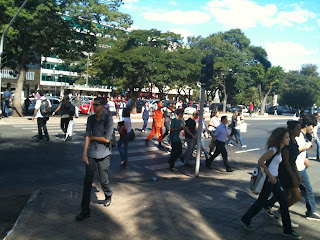 People often claim that Brasilia was not planned as a pedestrian city. This is not so. Pedestrian pathways were carefully constructed so that cars and Pedestrians are separated. The aim to me seems to be that people would drive or be driven to a key locale. Once there they could leave their car and walk around. The disadvantage is that if you want to walk between locales, you are frustrated.

For example. My Hotel Melia Brasil 21 is what would be a maximum ten minute walk from the Galeria Metro station in any other city. The walk however is 20-25 minutes and thats now I knew where I am going.  The nature of the footpaths mean people need to know where they lead because some just seem to stop and others veer in the opposite dorcetion to your destination but veer back via some hidden passageway.

As a  result, as  a tourist trying to get from hotel to shopping and main monuments basically means taxis, hire cars or Exhaustion. More seriously, there are unofficial paths everywhere crossing across the vast grassed areas and deaths from people crossing the roads illegally.

I will post more on the difficulty of walking around Brasilia. 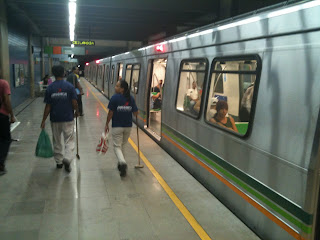 The focus on private cars and the economic malaise Brazil went through has reduced the ability to finance good public transit infrastructure.   Sightseeing and living therefore become costly.
There is a new Metro which I loved but its missing stations and sections but has already reduced car travel. It seemed hugely popular when I rode it. Extensions to the system are planned.

If anyone can work out the bus system, let me know

More Car Usage
The city design  actively  increases car usage. One friend’s apartment is  1.2km from his office. in most cities that’s an easy walk. Not for him.
He has a metro station near hid house and one “near” his office. Again the trip would take 45 minutes  to traverse to get from home to Metro and Metro to office. So consequently he drives.

Streetlife vanishes .
Walking around my hotel I would pass almost furtively other walkers . They were largely other tourists or the poor who cannot afford cars. 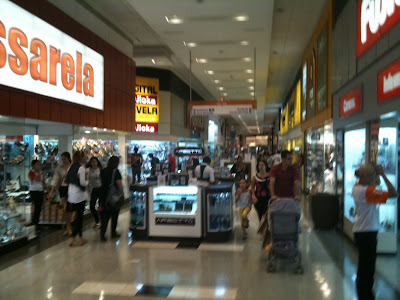 I found the streetlife in the air conditioned shopping malls which were full of Brasilianos walking freely. Straight lines, shopfronts etc

The City Park was also full of people in an environment free of cars.

However to get from City Park to the nearest shopping centre by foot is trickier than it needs to be.

Living Life
Doing errands is not easy. Everything is in sectors. Staying in a hotel, going to a client’s office and then to lunch with a friend and then buying a local cell phone is something that can be easily done in the same block in my home city Melbourne.

In Brasilia one would start at the Hotel sector, go to the Commercial sector then to the Shopping area and then back to the hotel. 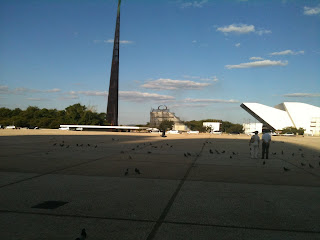 This city makes me feel small as human. The big distances between sections of the city or between monuments combined with empty streets, vast squares and tall buildings all dwarf you.

Other cities have big buildings but they are “softened” by smaller buildings grouped around them eg shop fronts that are at a height accessible to humans.

In Brasilia.  the only place that seemed to allow people to capture a sense of their human size was inside the shopping malls.

While I understand the desire to emphasis the grandeur and help people have a sense of awe and wonder and excitement about their capital, their nation and its future. This was probably the intention at the start but is it time to allow people to interact and live with their city. Far from attractive people to their institutions the layout feels like it alienates humans. 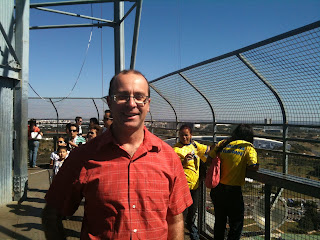 So if Brasília my Simcity-what would I do?

The Football in 2014 and Olympics in 2016 will make Brazil a place to visit for people across the globe. Brasilia is not ready

I am tempted to create Brasilia in a SimCity game (as soon as I can find one for my Mac) and see if I can add my changes and compare what that does to the game!
« Previous Article
Next Article »