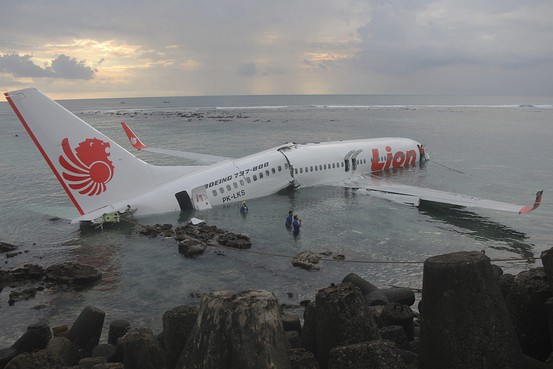 Indonesia’s Lion Air is Indonesia’s biggest domestic airline and with two massive orders for jets from Airbus and Boeing aims ot beocme one of the world’s largest carriers. Except for one problem:  its safety record.

While Lion Air (and other airlines) have big plans, a spate of deadly accidents In Indonesia has raised international concern about the nations’s air-safety standards.. Along with most of the Indonesian carriers, Lion—is under a European Union and US safety ban. While Lion doesn’t fly into either airspace, it loses business as many travel agents are barred from booking tickets with Lion Air. Lion have had seven incidents in a decade including one in April tis year when one of its brand new 737-800s crashed into the sea short of landing at Bali’s internatinbal airport. All 108 passengers and crew escaped -some with injuries. In 2004 passengers were not so lucky, dying at sabah airport

In its May preliminary report on the last crash Indonesia’s National Transportation Safety Committee raised concerns about Lion’s pilot training and procedures.  They recommended the carrier address three safety issues in pilot training

To do this,  Lion Air are  seeking partners with European Safety Agency or U.S. Federal Aviation Administration certification for their trainng porgrams including: