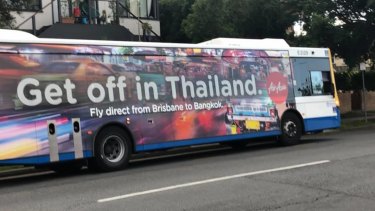 A bus in Brisbane carrying the questionable ad

AirAsia began a new direct flight route between Brisbane, Australia and Bangkok, Thailand in February this year. To announce the route, the airline placed the full size bus advertisements pictured above on the government bus fleet in Brisbane.

Melinda Liszewski of Collective Shout, a campaign movement against the objectification of women and girls says the ad was “promoting sex tourism” in Thailand noting that at least 250,000 men travel to Thailand for sexual services annually. We know that for every two female tourists that travels to Thailand, statistically, there are three men. The number of female sex workers in Thailand was put at 141,769 in a 2014 UNAIDS report. Some estimates run to double that and not all the women who get paid for sex are full-time prostitutes. Last year, the Thai Prime Minister called for “Thailand… to change its image of being a sex tourism destination” following a Gambian minister’s  comment that tourists planning in search of sex should eschew Gambia:  “If you want a sex destination, you go to Thailand.

Australian National regulator Ad Standards said it had received one complaint about this advertisement on a large billboard outside Brisbane airport. Between the time Collective Shout raised concerns about the ad (22 March) and the announcement by Air Asia that the ad was being removed (25 March) was three days! Clear corporate response to a clear community complaint.

Air Asia is a Malaysian low-cost airline. It is one of the largest airlines in Asia by fleet size (250) and destinations (165). They are rated a three star airline and ranked the 97th airline in the world by quality by Skytrax whose customers rate them six out of ten. I rank them 59 out of 60 airlines that I have flown (I have actually flown 103 airlines but 43 of that number are no longer operating -its a cut throat business).  I won’t fly three of Air Asia’s subsidiaries for safety reasons although the airline is focused on improving this.