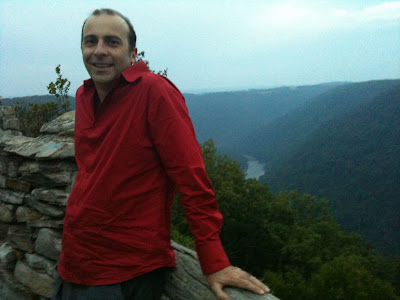 Headed down to West Virginia. This state West Virginia in the Appalachian and Mid-Atlantic regions of the United States. It became a state when it broke away from Virginia during the American Civil War. Bordered by Virginia to the southeast, Kentucky to the southwest, Ohio to the northwest, and Pennsylvania and Maryland to the northeast.

For me, this was my 46th US State,..,….only 4 US States to go!!  I wonder how many states the average American has visited? Anyone know?

West Virginia is a mountainous forested state…very pretty. Its also economically one of the more struggling states with the second weakest economy of any state in the USA. 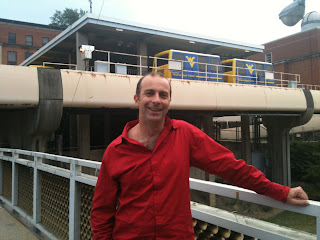 Why the fascination? I am a train geek and this represents a truly unusual system. Its an automatic people mover system which transports people on demand between stations. Think of it as subway meets taxi.  Have a look at my movie of the trip (NB it is not a Monorail but I liked the song!)


Built 1970-1979 and opened in two parts:  1975 and 1979. It has operated continually and economically with no incidents since then with a 98% reliability rate..far higher than most other transit systems!

The Morgantown PRT has about 14 kilometres (8miles) of track covering a distance of 6 km (3.6 miles) with five unstaffed stations: 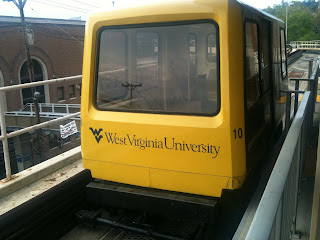 The PRT has 73 cars resembling mini-buses just under 5 metres long, 3 meters and 2 metres wide with automatic doors on both sides.  Each car can carry eight seated and 12 standing passengers.The record?  97 students in 2000 squeezed into a car during the annual PRT Cram when students from campus groups compete to set a record. 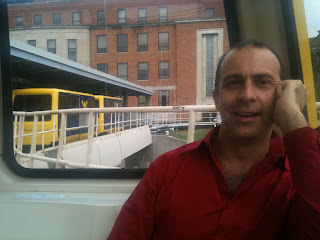 We rode Car 10 first of all (10 is my favourite number so was doubly pleased!)
There were two things I was surprised at: 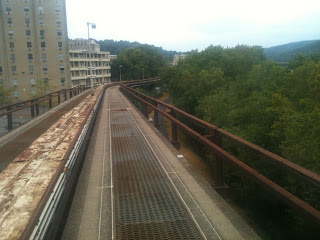 The cars run on rubber tyres in a  concrete guideway that has power and signal rails along the inner walls.  Both front and rear wheels steer so the tight turns on the track can be negotiated.  Each car has a guide wheel on each side. They can reach 50km/h (30mph) with average speed of 24km/h (14mph).  Sections of the track are at ground level and some are on viaducts. The concrete guideways feature embedded piping to melt snow and ice. More info on the system and the engineering behind it is here
After pressing a button at the Station entrance to call a car  a car is activated to transport the person to destination they have chosen. When a car approaches a station it can either bypass the station, or the wheels can turn and follow the  rails into the station.

On weekends and after hours,  the cars stop at every station.

There was one at Duke University Medical Center Patient Rapid Transit in North Carolina but it has now been closed and is being dismantled.

Thanks to my friend Cody for showing me round and being an excellent guide. Finally to finish heres a fun ad for PRT 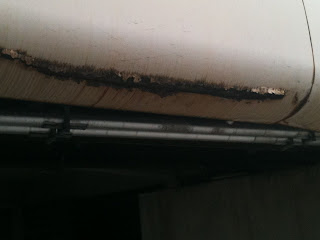