It is 523am -porch light and two house lights are on -and the front door is open. I have booked a taxi for two minutes later (525am) to ride to Adelaide airport

At the afore mentioned hour of 523am, my taxi arrives and sounds his horn.

Only Hellish Drivers sound their horn pre-dawn in a quiet suburban street, when I am clearly ready and waiting. I find this behaviour excessive, unnecessary and rude. 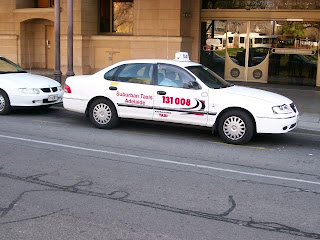 Hellish Taxi Rides: Uncommunicative taxi drivers (Peeve #2b Opinionated or racist ones that never shut up-there is a happy medium)

I walked out to the taxi with my bag. The driver popped open the boot (trunk) and hopped out. “Good Morning” I said. He didn’t say anything. “how are you doing?” I continued. More silence. He reached for the boot (trunk) to lift it. Unfortunately he fumbled, and slammed it shut which means he had to go back to the driver’s seat to re-open it.

“Relax” I said “small bag. I will put it on the back seat”. He didn’t say anything. He just sat down and closed his door.

I hopped around to the front seat (Australian men generally sit up front with the taxi driver).

Hellish Taxi Driver: Being rude to the customer

“You are late” he said pointing to the clock that said 527am. These were his first words to me.
“What two minutes?”.

He shrugged. “Its almost the end of my shift. I have to change over.”
“That isn’t actually my fault”. I said. “wheres your change over?”. He named a suburb that lay between my origin point and the  airport. “great” I said, “you will do that easily. 15 minutes to the airport, ten minutes back. Changeover 6am?”
“No” he said: “530 Changeover”  I looked at him: “you took a job for 525am knowing you had changeover at 530 which you would never make and you have the gall to tell me off“.

Needless to say on this early morning taxi ride, we sped to the airport, sitting 10-20km/h over the speed limit. The two most terrifying taxi rides of my life involve speed.

One was in Bangkok, Thailand when the driver tailgated cars on the airport freeway at 140km/h (84mph). I was so terrified that I texted my farewells to family and friends from my seatbeltless seat. I am looking forward to the Bangkok airport train there- when they finally open it.

The other was in Delhi, India where I discovered size matters-the bigger your car and the louder your horn, the greater the likelihood was of being given priority. We flew down the wrong side of the road, zipping back onto the correct side seconds before other cars plowed into us. Often we would end up on the “correct” side of the road to find a car overtaking from the other side. I recently learnt that “India overtook China to top the world in road fatalities in 2006 and has continued to pull steadily ahead, despite a heavily agrarian population, fewer people than China and far fewer cars than many Western countries” .  118 000 people died on Indian roads in 2008. That is 14 people every hour of every day through the year. Having learnt that, I now take the train, bus and subway everywhere in India! Seriously.

My customer unfriendly driver reached Adelaide airport at 540am and asked for his fare. I handed him my Credit Card which he processed. As I got out of the taxi, I asked for my card back. “I gave it to you” As politely as I could, I said: “No I don’t seem to have it“.  He said: “well you have got it“. “Are you sure?”, I said, “?” He looked down at the machine: “oh here it is“.

Needless to say he got no tip (NB its not a requirement to tip in Australia…tips are generally only given for good service ).  I must admit I only said “goodbye” and not “thank you“. 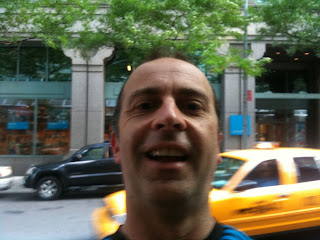 Now, confession, I used to be a taxi driver and drove 300 000 kilometres (180 000 miles) in taxis through many Melbourne nights to fund a University degree. I refused to give taxi rides from hell! I still know a few taxi driver tricks. I also knew how to give good taxi service.

Whats your taxi story?
(check out my blogs on the Best airlines and Worst airlines I have flown).