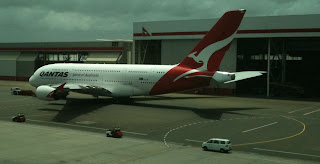 Qantas has announced they will now fly direct to Dallas Fort Worth from Sydney from May, 2011 using a Boeing 747-400ER. It is intended when Qantas finally get their 787s, they will be used on this route.

United are talking about deploying the new 787 on an Auckland-Houston flight, Suddenly, down under and Texas are looking closer!

Watch for Qantas opening flight deals and watch for United and Delta to offer deals between Dallas and Australia!