Whats the first thing you think of when you think Beirut, the capital city of Lebanon? Chances are: “war zone”, “Destroyed”, “unsafe”, “terrorist”. A website called Lebanon News: Under the Rug Swept features the Looks Like Beirut Certificate which notes  the times “people compare Beirut to destruction”.

For the world forgets that the Lebanese Civil War ended. It was a horrific war which claimed too many lives and did indeed destroy swathes of Beirut.

But the war stopped over 20 years ago. Today, Beirut is becoming the place to visit. Lonely Planet and the New York Times added the city to their “must visit” lists, I got my chance last month when I attended a conference at the UNESCO centre in Beirut. 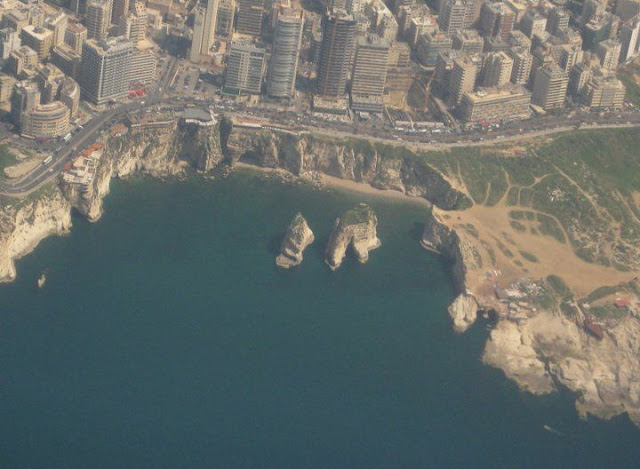 Landing in Beirut is jaw dropping. The planes make their approach from the water and the images of sparkling Mediterranean, snow capped mountains and residential towers fill your eyes. The rock formations above and below are known as La Roche (The Rock). 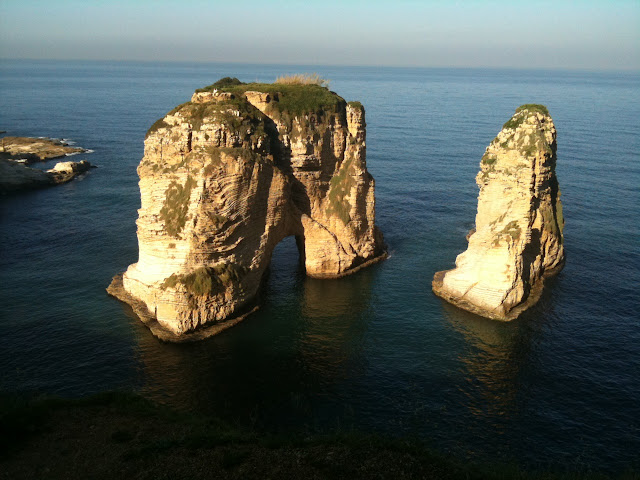 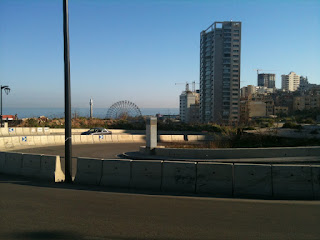 Visually, Beirut is stunning both naturally and architecturally. One of my favourite activities was running along the waterfront known as “The Corniche” (left) Filled with walkers, runners and pushcart vendors, moving through the area was always beautiful. I always had amazing views of snow capped Mount Lebanon and the Mediterranean as I ran. Beirut has a vibrant, crazy mix of new and old buildings, some bombed remnants and archaeological digs of showing the many layers of settlement (see below). Beirut has been settled for 5000 years and controlled  by Phoenician, Hellenistic, Roman, Byzantine, Arab, Crusader and Ottoman empires.

There is a revitalized downtown with office buildings, churches, mosques, souks (markets) and restaurants (left) most of which has been  rebuilt since the war. Infrastructure across the city varies. Some of the poorer suburbs lack footpaths. Traffic signals are distributed unevenly. Driving follows a unique set of unwritten rules. Beirut’s public transit system is very underdeveloped.  Buses ply mysterious routes and taxis hound pitilessly anyone the drivers suspects of being a tourist. See previous blog “Never Never Trust a Beirut Taxi Driver“. I suspect if there had not been a civil war, Beirut might have financed a light rail or metro line across the city with a station at the airport. Petrol was very expensive sitting around $3.00 a litre ($10 a gallon). 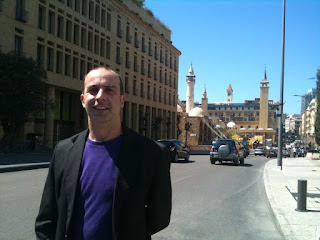 I loved the Hamra street area, seen by many as the heart of Beirut connecting downtown Beirut with inner Western suburbs of Beirut. Its very close to the American University of Beirut.  Before the war, Hamra was viewed locally as the “Champs Elysées” of Beirut with tourists and intellectuals making it their home. Today its been renovated and is home to great and reasonably priced high street shops (such as H & M where I stocked up on clothes) and stand alone retailers, coffee shops full of university students, restaurants with locals and tourists, and Lebanese young men driving up and down in their  cars with windows down and music up (they do this in Australia too!). The atmosphere was very vibrant. The food in Beirut was of amazingly high standard with very good service. The food always seemed fresh and flavoursome. There are foods from all over the world but I only ate Lebanese foods for breakfast, lunch and dinner including:

I found people were super friendly (even the taxi drivers after you had negotiated price). Greeting people in Arabic and then switching to English and or French worked well. The exceptions to the friendliness were some of the many security guards and army soldiers one saw. Some were welcoming and some were forbidding. The presence of so much military hardware and personnel while there to protect did, however,  feel oppressive sometimes. Taking photos at times was frustrating because so much photography seems forbidden. You of course cannot take pictures of soldiers  check points, tanks, barriers, guns and military signs. This makes almost any picture downtown tricky because the downtown was full of these things.  One soldier appeared from nowhere and stopped me taking  a photo of a fountain downtown (oops here it is). 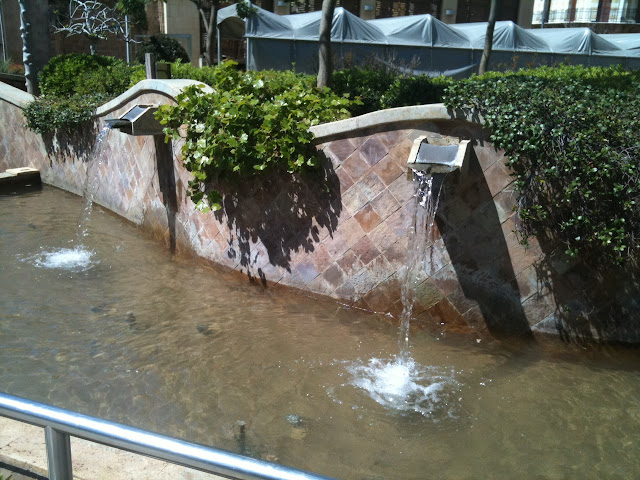 While everyone hoped for it, in many of the conversations, Peace still seems very fleeting and fragile. No one felt confident it was ever coming to Lebanon. When people talked openly about the war, they all blamed someone else for it.  In the meantime  Beirut parties hard! Enjoy! I cant wait to come back.