Thanks to Flight Memory.com and my friend Tony (see blog post), I know exactly how many fights, miles and hours have been spent in pressurised tubes of metal flying around the world. Even after many flying hours, and despite the determined efforts by some airlines to make travel as horrible as possible,  I am still wildly excited about plane travel.

Flight 737 on a Boeing 737 with Southwest was a fun experience. Flight 747 on a Qantas Boeing 747 was made very special by the delightful cabin crew. Flight number 757 epitomised the worst of air travel.

In DC for a client conference, the flight back to LAX was going to be my 757th flight in my life so of course, I sought a Boeing 757 flight.

Thanks to my friend Troy, we found United flight 967 out of Washington Dulles non-stop to LAX.

Washington Dulles airport is a horrible trek being 41km out of downtown DC. A new metro line is being built and will be finished by 2014 but in the meantime there is a slow local bus or a coach/metro combination or taxi with bad traffic.  I opted for a cab organised by my hotel which was driven by a lovely 20 year old college guy from rural Maryland but it turned out to be driving the cab for a cousin and he did not know the way out to Dulles airport. He called a friend to say: “Dude I am on the left land of the freeway heading toward Richmond, where should I be? “

I normally never check luggage in but was carrying a lot of extra stuff as I was Australia bound. The Premium Economy check in line was fast but the actual human interaction was underwhelming- Mr Check In couldn’t give a damn. It never ceases to amaze me how US airlines fail to support their employees to be friendly at every touch point. I know check in staff are underpaid and stressed but United needs to help them make an effort to make customers feel welcome. I get tired of the videos by United saying what a great airline they are and how happy they are we have chosen to be with them when every employee makes me feel like they resent me being there.

I get tired of the videos by United saying what a great airline they are and how happy they are we have chosen to be with them when every employee makes me feel like they resent me being there.

I have now sworn off mobile boarding passes particularly as I have no hard copy evidence of my boarding pass.

The actual welcome aboard was friendly and the Crew even offered to stow some extra luggage in a closet for me. 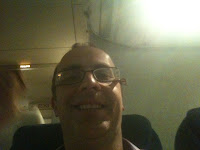 On Board: 2/10  – Modern flying means being cramped

I normally avoid any seats further than the over wing emergency exits so to have been allocated a seat at the back of an oversold plane was a shock!

I had waitlisted for an upgrade to First cabin but was not successful. Nor could I snag an extra legroom room Economy Plus section or in the  757s’ very generous exit rows and despite United automatically wait-listing me for both.

My seat 40C, is the aisle seat at the very back of the plane in the seatguru map on the left! The only positive thing about the seat was that when we departed, there was one empty seat left on the plane and that was 40B!

A perfunctory safety briefing was performed by an unsmiling seemingly unhappy automaton.

I love watching approach and landing but the guy by the window in my row was a closed window man. Airlines in Australia and New Zealand insist on window shades being open for landing saying its for safety. United seemed to have no such stipulation. I find it amazing that we can fly over amazing landscapes and passengers snap their shades closed to watch movies set in the same landscapes! He would peek out his window every now and again and when he did I would edge forward and stare outside. Finally, he left the window shade for our last 45 seconds of flight.

Takeoff- Two Hour Weather Related Delay
The doors closed two minutes after departure time but we sat at the gate while ATC gave us a “re-routing” to avoid nasty weather. After a while we pushed back, we lumbered slowly around the airport to come to a halt on the tarmac with a line of other planes. Soon there were planes everywhere all grounded because of the weather. After about two hours we finally were cleared for takeoff. As the rain started, we launched off into turbulent skies. To his credit, the captain briefed us three times while we were waiting but I think one every 15 minutes would be better -we were given a glass of water and a football show during the wait time