I have been critical about the “budget” carrier Tiger Airways Australia which can be likened to a bus with wings as noted in my previous blog about them.Seems the bus is not safe.

This grounding came after they had given the carrier a warning in March saying Tiger needed to “improve the proficiency of Tiger Airways Australia’s pilots, improvements to pilot training and checking processes, changes to fatigue management, improvements to maintenance control and ongoing airworthiness systems and ensuring appropriately qualified people fill management and operational positions.” 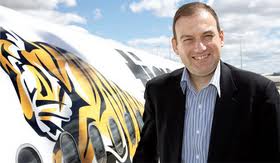 Tiger is rejecting any concerns they are unsafe (would nt you?) with CEO Tony Davis expressing regret over the decision (pictured right)

The grounding is a disaster for the airline which has not made money since setting up shop in Australia. The last grounding we had was of Ansett’s 767 fleet and that was one of then final straws for them.  Unlike Ansett, I won’t mourn Tiger but yet again we are going back to the two airline situation we have always had in Australia. The names have changed but the structure is similar. Qantas and Virgin instead of Qantas and Ansett or before that Trans Australia Airlines (TAA)  and Ansett-ANA or before that Ansett and Australia National Airways.

The difference is Qantas now has two segments of the market with its budget Jetstar subsidiary and the more corporate focussed mainline Qantas.

Some questions:
1. Will Tiger survive?
2. Virgin Australia continues to lose money-how long will they sustain that for?
3, Will Qantas hang onto its premium passengers or lose some to Virgin concerned at the Jetsar -isation of the mainline carrier?

As for me, I am taking the train to Adelaide next week.