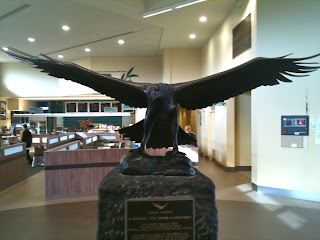 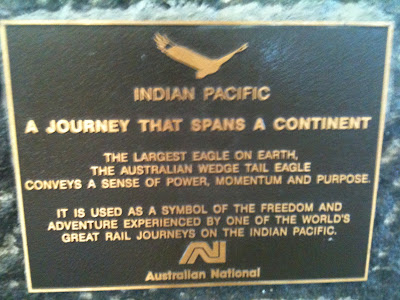 Adelaide and Sydney are about 1400 kilometres apart.  Twice a week the famous Indian Pacific train travels across the country from Adelaide Keswick rail terminal to Sydney via Broken Hill.
The train departs Adelaide mid morning (10:00am) each Tuesday and Friday, reaches Broken Hill that same evening, then travels through the night across the Blue Mountains and arrives at Sydney Central station at 10:15am Sydney time, almost exactly 24 hours after leaving Adelaide. 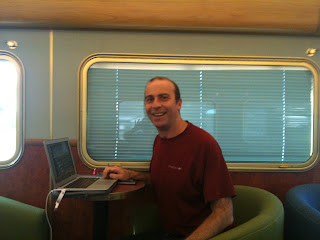 As part of my No Fly July, I took the train and blogged live from the Lounge car!
The train, 28 carriages long on my journey, consists of effectively four classes: 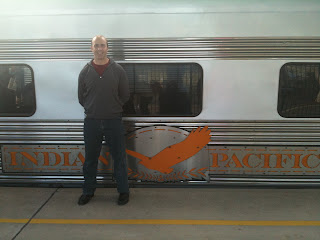 I was in the Red Sleeper. I actually booked Red Sitter class but took advantage of an on board upgrade. The upgrade cost $150. So my total fare for the trip was less than half the cost if I had booked it before boarding.
The trains are 40 to 50 years old but have been refurbished and are spotlessly clean. 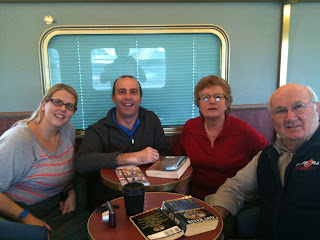 The nice thing about train travel is you make friends. Here are my “Lounge mates”. Left to right, Rebecca who lives in Houston, Texas (but is originally from Louisiana), me, Will and Helen from the Central Coast region of NSW. We enjoyed Scrabble together.

There were also some other “interesting” characters on the train including one woman who threatened one of the train crew with assault when he asked her to remove her feet from a seat.

After an evening of work and Scrabble, I retired to the next carriage: The Red Sleeper and my cabin with beds 21 and 22. 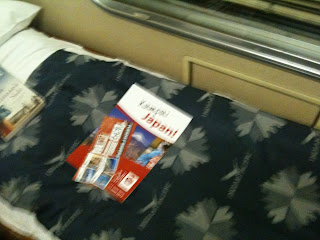 My cabin had two chairs which you can sit in during the day. I preferred the spacious lounge car.
The chairs are folded away to allow space for two beds. I had the cabin to myself. 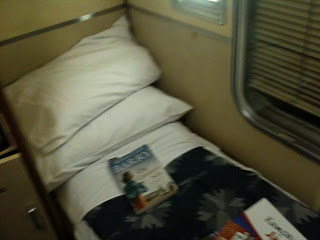 The bed was narrow but very comfortable. I went to bed at around 10 and read for a little while. The train was rocking and jarring quite unpleasantly at this point somewhere in the midst of outback NSW. I fell asleep just before 11 but was wakened by a jar at 1211am thinking in my sleep induced state, that we must have come off the rails!  I fell asleep again and slept soundly until the morning when I woke up near Lithgow NSW. 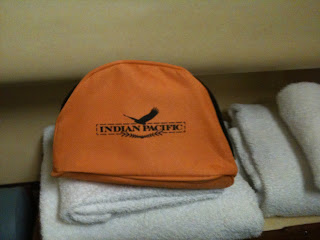 I showered as we went through Lithgow. Great Southern Rail gave me a nice toiletries pack. 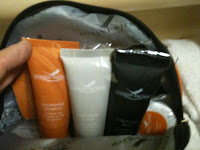 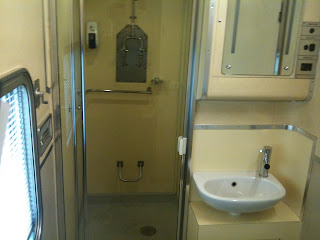 At the end of the Sleeping Car were two very spacious showers with fresh warm water. It was a very civilised way to start the day.

The trip starts on the edge of Adelaide city, crawls through the Northern Suburbs of Adelaide, through pasturelands and small towns to the outback. It passes through several towns including what was the railway town of Peterborough, now a shadow of itself.  We were late into Broken Hill which meant the tour of the town that many of the train were going on was cancelled. Sunset was just outside Broken Hill so we didnt see much after leaving the “Silver City”.

Breakfast was through the  stunning Blue Mountains and I even got some more work done before the journey’s end. We pulled into Sydney’s Central Station 30 minutes late but that didnt seem important. I must admit (call me train nerd!) I felt a pang of sadness as we left the Indian Pacific. Flying never feels that civilised!

Train crew were excellent. I was very very impressed with their friendliness, “can do” attitude and efficiency.

While I had excellent internet reception via my phone and mobile almost the whole way, having an onboard wifi service would make sense in this era.
My biggest criticism of Great Southern Railway is their online booking system.  It has way too many steps. I would like to type in Destination/origin/date and get a list of all of the available cabins and fares. Instead to compare fares between cabins and classes, a user has to start the whole transaction each time.

With this trip, another significant gap in my journeying over the Australian rail network is filled!