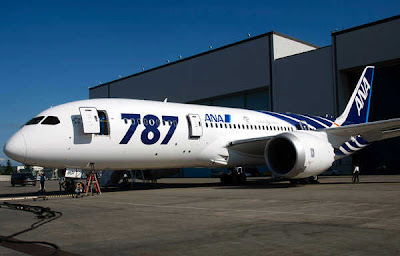 The Good News: The 787 has been passed as compliant with all US and European safety regulations!

The first plane will be delivered on September 26. This is later than I had hoped! For ANA have always said they would start flying the plane one month after delivery.

The first ANA 787 commercial flight is a “charter flight” on October 26, from Narita to Hong Kong (and return). 100 Economy passengers will be on board, chosen by lottery from people who book on the ANA website. Business class seats will be sold by auction with proceeds going to charity. You can win a seat too. See my post from last Friday.

This will be followed by some excursion flights on October 28 and 29 from Narita – to Narita.

The first commercial flight will take place on November 1 on a domestic route from  Tokyo’s Haneda airport to Okayama and onto Hiroshima.

In December, the new plane will start a weekly international service from Haneda to Beijing followed by thrice weekly Haneda to Frankfurt Germany in January, 2012.  In February, the Frankfurt service will go daily.

My goal has been to get on the 787 for my 787th flight but the timing of the launch (which clearly was not planned around me) is almost out of reach!