In 1995, a good friend visited Petra. That was the year that it was designated a World Heritage Site.  I saw his picture of the main temple known as the Treasury and I was hooked. I have wanted to go ever since.  Steve Davey of the BBC said it was one of Forty “Unforgettable Places To See Before You Die.”

I got my chance this year! I have only had to wait 16 years! And the visit was well worth it. A few things about Petra…

Petra is in modern Jordan, about 300km south of the capital Amman. I took a comfortable Jett bus from Amman and a less comfortable tourist bus from there to Wadi Rum (another post). Transport was well organised, punctual cheap and safe. I would love to see Jett Buses in many other countries. 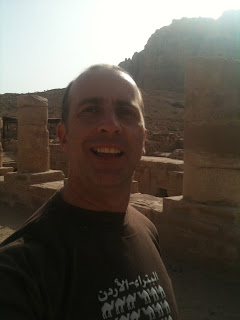 The Nabataean Arabs founded the city of Petra  around the 6th century BC. They situated it between the Red Sea and the Dead Sea on an important crossroads between Arabia, Egypt and Syria-Phoenicia. Petra became a major trading centre with caravans coming from multiple directions.  There is a story that the Three Wise Men would have stopped here and may even have bought their Gold, Frankincense and Myrrh here.

Petra was captured by the Romans (2nd century AD), the Arabs (6th Century AD) and the Crusaders (12th Century). It was also impacted by earthquakes which caused its decline. The City vanished from the world’s eyes inhabited only by Bedouins until 1812 when a Swiss explorer revealed it to the world.

The most impressive feature is that in the midst of the desert, the  Nabataeans built a series of dams, and water courses which allowed them to create an oasis. 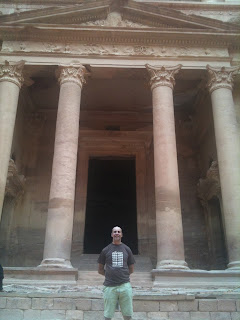 Petra is Huge
There are 800 individual monuments in an area 100 square kilometres. The way in is through the Siq, a 1km narrow gorge with 80 metre high walls. At the end of the Siq is Al-Khazneh ( known as the Treasury). It was built as a King’s tomb and never contained valuables but the name stuck.

It is an awe-inspiring building – 43 metres tall and 30 metres wide.

For many, this is all they see of Petra. Many tourist buses unload their passengers at the entrance. The tourists walk to this monument, take their pictures and leave.

The people at my hotel recommended that I start as early as I could and walk to the end of Petra and work my way back, taking a full long day. 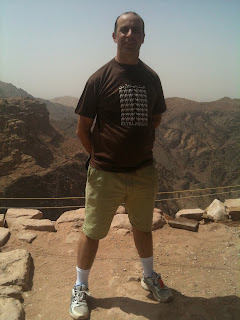 This was great advice. Rushing through to the end meant that the final monuments were mostly deserted. Few people get to them anyway and they take their time. By the time I got back to the main monuments in the middle, most people had gone.  Unfortunately, every few metres had a Bedouin family who were selling souvenirs and trinkets. They would implore you to look at their (almost identical) wares. This meant continual saying no and shaking my head! This was a minor irritation in what was a  stunning stunning day

I took a lot of water and some food which I needed. Drinks were available inside the Park at reasonably inflated prices. 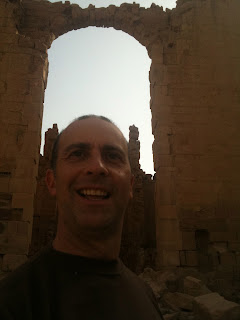 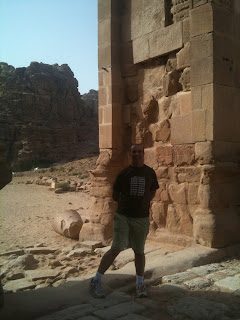 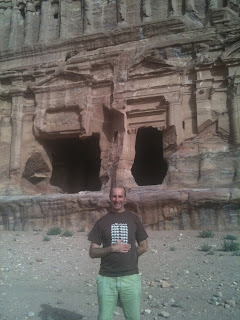 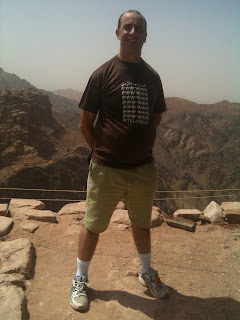