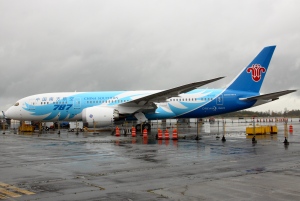 The delivery last Sunday of a Boeing 787 to Guangzhou based China Southern airlines makes the carrier the first in the world to fly both the 787 and the Airbus 380. China Southern  are now the largest passenger airline in Asia, carrying over 85 million passengers last year. The carrier is rated a four star airline by Skytrax.

The status of orders of the two craft by Chinese carriers is:

At first, China Southern will use the 787  on the Guangzhou – Shanghai services. By the end of the year the carier plans to have five of their ten 787s  delivered and the plane will be deployed on the “Canton Route” between Australia and Europe. This will be followed by Vancouver services.

The China Southern A380 strategy has been thwarted. The expectation was that it would use the plane to expand operations from Beijing airport. The problem is that the nation’s main international gateway is the home base of Air China. It seems that while the Chinese air regulators are happy for domestic competition between the main Chinese carriers, they are preventing head to head international competition.Each carrier is locked into a single international gateway (see table above). According to CAPA, Air China has 37,000 weekly long-haul seats out of Beijing airport a week compared with China Southern’s 2,000 seats.

China Southern have, therefore not been successful in getting regulatory authority to use the A380 internationally from Beijing. Its home base, Guangzhou, less than 200 km (120 miles) from Hong Kong does not have the premium traffic needed by the airline to justify use of the A380 on its international services. It has therefore been operating the airliner at a loss on domestic routes. Late last year it began daily Guangzhou-Los Angeles services.

China Southern entered into discussions, this year with rival Air China to jointly operate the A380s on the Beijing-Paris and Beijing-Frankfurt routes but these ended in May, 2013: ” as many issues arising during the negotiations couldn’t be resolved“.It seems Air China were happy to lease craft and crew from China Southern but market the flights as Air China.

The airline will now begin a “trial A380 service”on the Guangzhou-Sydney run from late October, replacing one of its daily A330 services and increasing capacity on that route by 41%. This has resulted in some extraordinarily cheap econiomy and business class fares to Europe from Australua with the carrier. In a very honest statement, the carrier said: “If demand for flights on the Guangzhou-Sydney route turns out to be weaker than expected, we could probably try to restart talks with Air China,”  In the meantime, they have five very expensive paperweights.