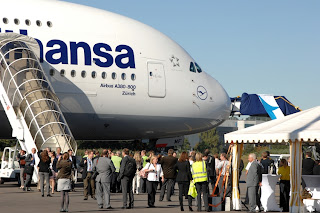 On Tuesday13th September,  Lufthansa named A380 D-AIMF “Zurich“, after the Swiss city which is hub for the Lufthansa owned SWISS airline.  This particular A380 was the sixth in the Lufthansa fleet and has been flying for them since April this year.

While the plane is named Zurich, there is no suggestion of it moving from its Frankfurt base to the Swiss city. Passengers will have to fly from Zurich to Frankfurt to connect with Lufthansa to its A380 destinations  (Beijing, Miami, New York,

Only a couple of weeks for my Lufthansa A380 flight, which will be my fourth A380 carrier (already flown Emirates, Qantas and Singapore)