According to my Flightmemory, flight number 767th of my life has ticked over.  My 767th was with Qantas on a “Red Eye” Boeing 767 from Perth to Melbourne. At one point I thought it was going to be Air New Zealand but life is unpredictable isnt it?

I acknowledge it has become an obsession of mine to match the Boeing type to the number of flights I have done! So far, managed it with flights 737, 747 and 757. (How I know how many flights I have flown is described in my blog here). After this fight,  I have now been flown 171,237km  (106,402 miles)- over 4 times around the world on on 108  Boeing 767 flights.  Of those flights 64 of them were with Qantas.  These flights have taken me to Europe, the USA, Canada, NZ and El Salvador.

Qantas had two staff at the boarding area measuring and weighing hand luggage. An American woman had her bag forcibly checked in and a group of Asian tourists also had their bags taken. I thought the way the bags were taken was a little officious. In fact most of the other passengers were travelling very light. Many of the FIFO workers had no bags at all and there was a lot of bin space on the plane. Still Qantas rules are rules and the lack of large bags on their flights does mean boarding is so much faster than on the USA equivalents.

Today my 767 was VH-ZXF which seems to be an un named plane. Qantas has had this 20 year old plane for five years getting it from British Airways. 767s have two  engines and a wide body cabin with two aisles and a  2-2-2 in Business class and 2-3-2 layout  in Economy. I like it because you are no more than one seat from  an aisle or a window.

I got seat 26A, window seat in the front of Economy in the Bulkhead row. The plane was quite full-mostly with “FIFO” (Fly In Fly Out) mining workers.  I had no one next to me.

Take off was smooth out of Perth. We departed a few minutes later than our 1210am departure but were promised a good tail wind.  And indeed the Pilot was correct. Despite a late departure we bumped heavily onto the runway into a cold Melbourne dawn five minutes early. The entire flight was entirely in the dark as a result of the schedule.

You can have quite a few bumps out of Perth but on this day there were none.

I dozed off right away and missed the meal service. I had planned not to eat. It smelt nice though. I woke up for a while, then slept until we started descent. I missed whatever Qantas gave out just before landing. I think they provided fruit juices and water but I was still asleep.

Entertainment on this plane consists of radio channels and a program of movies, TV shows and documentaries on the main cabin screens. 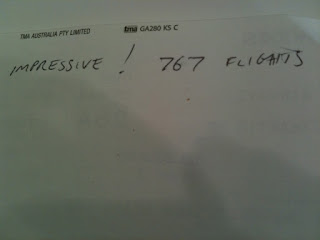 After landing, we got the unauthorised in-flight announcement from the First Officer inviting us to support their union campaign  ensure a Qantas pilot is in charge of a Qantas flight. Not sure how successful it will be.  I did appreciate their skill and experience today. I especially appreciated them signing my Boarding Pass (below) and including an encouraging message on the back (right) 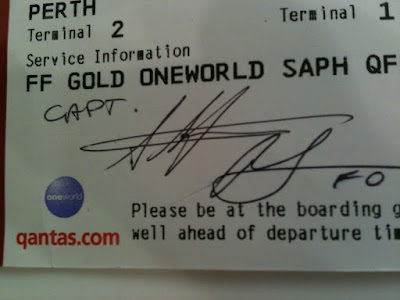 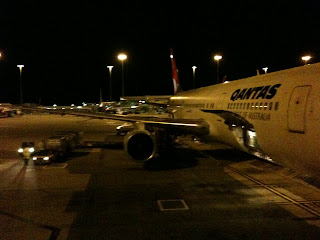 Todays flight was very enjoyable. I would give it 8.5 out of ten. The luggage confiscation at the start and the lack of individual entertainment lost them some points.