I did not need to fly Tiger Airways Australia on this day. Qantas and Virgin had plenty of available seats.  After their recent grounding for six weeks by the Australian safety watchdog, I was curious to see how they were bouncing back. Plus I wanted to show some support for competition in Australia. (NB Their CEO lost his job over the groundings which were the result of some pretty significant safety errors). 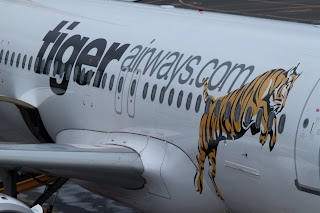 I have previously rated Tiger very poorly and in that review and in other public statements I have indicated that I was not in a hurry to fly them again. They only started flying again just on three weeks ago after those six weeks of no service.

Seconds, after booking my ticket on Tiger’s user unfriendly website, I got my travel confirmation. As a very frequent flyer, I gave it a cursory read to check that the date, time and destination were correct.  I admit I didn’t read any more than that.  I filed it in my email and made sure it was entered onto my Tripit (see blog post on this useful travel app which creates your travel itineraries).

Yesterday,  I tried to use online check-in  but discovered  “Tiger Airways Australia’s Web Check-in service is temporarily unavailable, as this will allow us to more efficiently process refunds for affected passengers”.

This, of course, meant a check in at the airport. This made me a little nervous because of Tiger’s carry on luggage limit. On my fare, my carry on limit was 10kg. Confession Time:  I had my main bag coming it at just over 7kg and one carry on which was just under 5kg. This means that if they weighed my hand luggage, they may have demanded payment. I don’t mind paying- I just hate checking luggage in. Turns out this was the least of my issues.

I knew Tiger are strict about cutting off check in so I made sure I got to the airport at a good time before thinking it was similar to Jetstar’s thirty minutes.

I waltzed into a completely deserted check in area at 4:58pm for a 5:40pm flight. It was at this point,  I discovered that Tiger’s  check in cut off is 45 minutes NOT the thirty minutes I assumed it was. Qantas closes their flights 15 minutes (30 minutes with luggage) before the flight. Virgin recommends 30 minutes and Rex is 20 minute cut off in regional centres and 30 minutes in Capital cities. So 45 minutes is way outside the norm.

So, I and another gentleman arrived simultaneously 42 minutes before departure to find the check in had closed- Three minutes prior!

The supervisor was unmoved: “on your ticket confirmation it says 45 minutes. Since the grounding we have to be very careful”

Me: 45 minutes is not a CASA requirement
Him:  Its our system. It closes automatically and I can’t get back into the system. We need that long to process things.
Me: thats not a friendly system!” How many empty seats have you got on the flight?
Him: “A lot, but I can’t get you on”
The other passenger,  a young student was close to tears:  “I have to be in Sydney tonight for an interview tomorrow”
Our Tiger guy said: “there are no more flights tonight, For 85 dollars I can get you on the first flight tomorrow.”
Annoyed, I pulled the painful passenger attitude:  “For 109 dollars I can get a flight to Sydney with Virgin now.”
He shrugged. I should know better than to argue with an agent in this situation. You cannot win but I tried: “I fly 120 times a year. You can either get me on this flight now or I promise you I will never fly Tiger again”
He looked at me and said “if you had been here on time, I could have.  Check in opened two hours before departure”
Me:  “I obviously wasn’t here, two hours before departure. So that comment isn’t helpful. Good Bye. You have lost me Tiger.”

I wheeled my bag to the Virgin Australia terminal next door and booked that $109 flight on line. I then checked in and was on the 18:15h flight which departed a mere 35 minutes after my original Tiger flight.

My Flight Rating: 5%  (infinitesimal score out of 5)

About the Airline: They commenced services in the Australian domestic airline market on 23 November 2007 as Tiger Airways Australia. They entered the busy Sydney to Melbourne market in 2009.

My overall rating of  Tiger: 56% which puts them above Air Zimbabwe

Would I fly them again? No

I understand strict cut offs for check in. I acknowledge I need to check my travel confirmation more closely. Today, however, Tiger could have done better. Why could some allowance have not been made for the following reasons:

If they had given me a polite warning about their strict check in policy and allowed me on, this would have resulted in:

They may have won this battle but now? Nothing will get me back on Tiger’s crowded uncomfortable planes flying out of tacky cheap terminals!

My six other missed flights :

On three occasions, missing the flights was not my fault but I do take responsibility for three!