After 43 years of flying I flew on my 777th flight.
In a previous Blog post, I was trying to decide whether to fly my 777th on an Air New Zealand or V Australia 777. I appreciated the advice from friends to try Air NZ’s new 777-300 and was glad I did. I have recently blogged about V’s superb business class product on the 777-300. This Air NZ flight gave me lots of opportunity for comparison.
For those who haven’t been following: I flew #737 on a Southwest B737, #747 on a Qantas B747, #757 with United and #767 with Qantas. For some the number 777 represents perfection and my 777th flight was indeed close to perfect! I took 77 pictures would you believe?!

Air NZ have a dedicated Check in for Business and Gold passengers at Auckland Airport with a lift (elevator) straight into customs, immigration and security saving  much time walking around the long way. Worth staying gold for just for this feature! I checked in early, was the only one using the check in area and was through the whole process in just under 10 minutes! 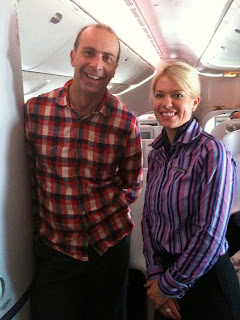 The Auckland Air NZ  lounge is superb. I enjoyed wifi, meal, snacks and a shower. I ate carefully because I wanted to save room for the on board meal! NB V Australia use the same lounge at Auckland.
While waiting in the lounge, I met the on board Concierge, Belinda (pictured next to me).  I have not seen this innovation on any other airline and its beyond impressive.  My previous experience suggest that the team that Air NZ have chosen for this role are all very good and Belinda was no exception. Concierges answer questions, problem solve, help develop itineraries and make life aboard more pleasant for travellers. Belinda was saying she gets a huge variety of questions – from “can I store luggage at LAX” to “where do I connect?” to “what restaurants are good in San Francisco“.
I introduced myself to Belinda as the plane geek flying for the 777th time on a 777. She acknowledged that reservations had emailed about me and she had a small gift for me. Thanks Air New Zealand. Impressive again.

After leaving the lounge, we had another passport and boarding pass  check. Some passengers were randomly searched. How someone can have got through check in and immigration with a wrong or false passport I don’t know. It seems like overkill. Do they really think they will catch someone at this point?
There was almost no line up for the priority boarding line and I zapped through it being wished a good flight by ground staff. Belinda was on hand in the lounge area and welcomed me by name which was a nice touch.
There was a small line to get on the actual 777 but it was moving quickly. There was a sign in the passageway reminding passengers to have their boarding pass ready to show in the aircraft. I have not seen that before but it is helpful especially for people who are not expecting this. I have noted there are some countries where the staff don’t look at the boarding pass as you enter the aircraft. On board, I was  invited to go left into the front business class cabin.

The Air NZ 777-300 has three cabins (as does V Australia). NB V dedicates more of their plane to Economy. 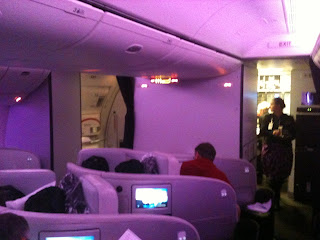 You will see from the diagram that Air NZ have opted for the herringbone design resulting in four seats across the Business cabin.

The front cabin was about half full on this flight.  There were plenty of staff bustling around. Within seconds of putting my bags in the roomy overhead locker, a flight attendant appeared to take my jacket for hanging.
Seconds later, another approached bearing drinks. I asked for champagne. She smiled and said:  “I can give you sparkling wine on the ground and champagne in the air. Well at least until we beat the French in the Rugby” (which they did indeed do, a few days later 37-17).
I said “oops. Forgot about the French”. 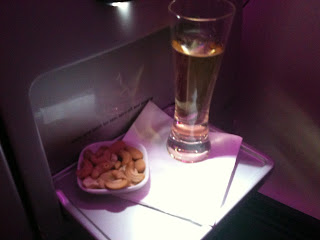 The Air NZ Business Class Seat: 8 out of 10
I sipped my drink and enjoyed my cashews as I checked out my seat. The seat is leather 22″ wide (V Australia’s is one inch wider at 23″). It has a separate ottoman footrest which you can store stuff on, invite visitors to sit on when chatting to you or put your feet on.
The seat has a 12″ TV screen which could be moved into multiple angles, life jacket and a very small storage pocket. I felt both Qantas and V Australia have a little more stowage room around the seat. I like the way QF has a slot available for a bottle of water while Air NZ’s supplied bottle of water didn’t seem to quite fit anywhere.
Headphones were noise cancelling.
Next inspection was the all important amenities kit. Coming in a big box, the kit consisted of a very colourful pair of socks, and La Prairie brand moisturiser etc. Air NZ didn’t provide an actual toiletries kit – unlike V Australia. I would love an airline to give me a quality clear sturdy plastic kit I can take through security anywhere in the world.

Auckland Newspapers and international  magazines were distributed. There was some disquiet from some passengers that there were no Wellington or international newspapers.

Safety: 10 out of 10
The safety briefing video was the humorous Air NZ rugby one. I always feel that Air NZ take safety seriously without officiousness and try to engage their passengers in the safety process. I did wonder what non-Kiwis would make of some of the “in-jokes” in the video briefing.

2130 (930pm) Takeoff out of Auckland was pretty with the city lights  spread out below. There were a few minor bumps out of Auckland but nothing dramatic. The seat-belt sign soon went off but came back on very quickly, however as we hit some turbulence. This  seemed to be the pattern for the first half of the flight. The sensation of sitting at an angle to the direction of takeoff and landing is one I have not got used to. It does feel quite odd.

There were three choices with Business Premier for dinner: 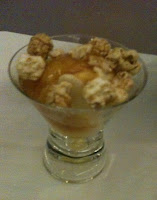 Sorry folks, I am not sitting up front to have an express soup and sandwich and I went for the works and must admit I was probably a little piggy. 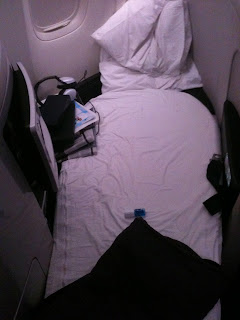 The Bed: 8.5 out of 10
The team turned my seat into my bed with a nice thick mattress, duvet and two pillows- duck feather and hypo allergenic. Air NZ do not appear to provide pyjamas so I wore my Qantas Pjs on this Air NZ flight!
Sleep came quickly and I reckon I got about seven hours.
The bed is a little more comfortable than Qantas business class bed and about the same as V Australia’s bed. Air NZ mattress is probably a little more comfortable than V Australia.  I did feel a little strange sleeping at an angle. I must have overcome that because I slept for almost seven hours-soundly.

I must tell you about the lavatories on board (I ended up inspecting almost all of them!). Two of the three business class ones have real windows in them so you can look out at the clouds while using the facilities. The lavatory for people with a disability has a mural of a bookcase in it. All were clean and sparkling when I saw them

Breakfast
I was more restrained with Breakfast having fruit, muesli and yogurt and a croissant  This is where the 777 fun really started. The crew really went out of their way to celebrate the fact it was my 777th flight.Using ingredients on board they had made Little decorative plaques celebrating with me. Thank you. 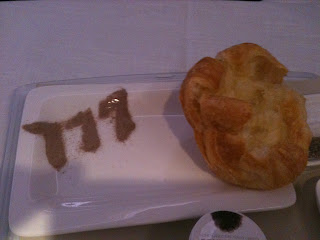 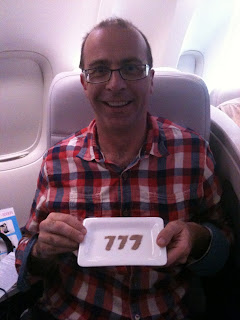 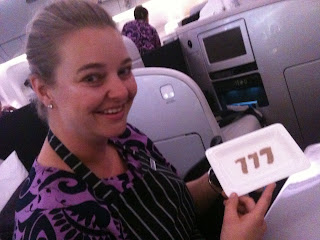 We were right on time into a smoggy lax. We left at 930pm NZ time and landed into lax at 240pm the same day because of crossing the dateline.

My average rating for all Air New Zealand flights is 4.9 over twenty years-so brilliant as usual. It was hard to fault this flight. It confirmed to me that on this sector V Australia (5.0) and Air NZ lead business class with Qantas (4.7) narrowly behind. Way at the bottom on this sector is the woeful United offering (2.8 out of 5) . I haven’t tried Delta’s Business Class on this sector yet. That’s for 2012!

Positives:  Where do I start?

Would I fly them again? Absolutely. Thank you to the Captain and the whole crew of NZ2 for a superb flight.

I was hoping for 787 for my 787th but that’s not going to happen because the plane will start flying the week after that milestone. Instead I have A380 flights with three of the carriers I have not sampled the A380 with yet: Korean, Lufthansa and Air France. 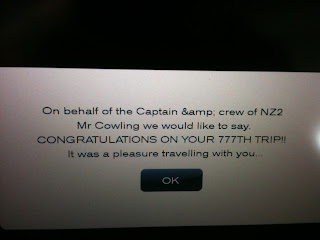 Below is a summary of my 777 flights and a world map showing where they have taken me. Some other Flightmemoryfacts: I have flown Air New Zealand 39 times traveling twice around the world. I have only flown the 777 17 times including this flight.