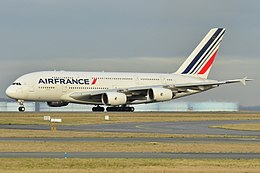 Another impact of COVID19 is Air France’s early retirement of their ten A380s, just eleven years after the airline first received them.

The CEO of the Air France-KLM group Brian Smith indicated that he is absolutely not a fan of the A380 saying in 2019, that while passengers love it, the plane is not suitable for the airline as it is expensive, unreliable and too large. Smith in trying to reduce Air France’s complex fleet structure and confusing product range, indicated their ten A380s (five leased and five owned) would be gone by 2022.  The changes brought by COVID19 bring that goal forward. The grounding will reportedly cost around half a billion euros in write-down charges. I have long held a goal of flying at least one A380 belonging to each of the airlines flying it.  I have managed 21 A380 flights with seven airlines. Unfortunately, 2020 has interrupted my goal. Originally I was going to try and add four more airline’s 380s to my collection this year, namely adding ANA, China Southern, Etihad and Qatar. I wonder if this will ever be achievable?

My two Air France A380 flights from New York JFK to Paris CDG and back to Los Angeles have been my least favourite experiences of the aircraft.

The Air France configuration is dated and inferior to almost every other airline’s product. Downstairs, the plane has nine open First Class seats with 81″ pitch and 35″ width. Compare that to Emirates and Singapore’s Suites, Etihad’s apartments which have more privacy and more space. Economy takes 343 seats downstairs and 46 upstairs with a 32″ pitch and 17.5″ of width. Upstairs, the 38 underwhelming Premium Economy seats sit behind Business. The seat, which I found to have an incredibly uncomfortable has 38″ of pitch and  19″ of width. The Business seats at 55″ and 24″ are much smaller than Asiana’s 80″; Ethihad’s 73″ and Qantas  at 78″.  Air France’s 777 offers a much more competitive option.

This 2015 Air France video is from happier times: