I have two more blogs to conclude my description of my experiences of Brasilia, the planned capital city of Brazil. The previous four are:
Tomorrow’s Blog will tackle the fundamental problem of Brasília- successfully being a pedestrian!
I took a very informative Tourist bus for a two hour tour of Oscar Niemeyer’s awe inspring architecture. Niemeyer’s was responsible for most of the public buildings in Brasília. You would recognise his UN Headquarters in New York City. He is still designing buildings at the age of 103!In Brasília, his buildings are mostly arranged along the the East West axis of the city known as the Monumental Axis (see blog post). 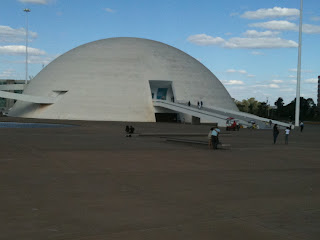 First building on the Monumental Axis moving away from the centre of Brasília is the space agey  looking National Museum. Great building and looks fascinating. My criticism is that it looks very alone in the huge square that surrounds it. In my first blog about Brasília, I dare to suggest the museum needs another building plus I would love to see a Guggenheim built opposite it.
The exhibits in the Museum are very good but modest. The museum can be thoroughly visited in a less than an hour. 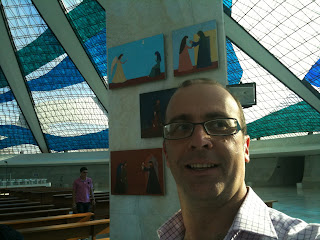 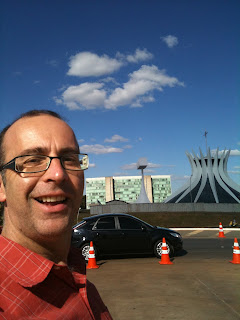 I fell in love with the Brasilia Cathedral  which is next along the axis. Its amazing! Consisting of sixteen curved 90-ton concrete pillars and stained glass panels, it is a stunning modernist building opened in 1970, ten years after the city’s opening. Niemeyer was deservedly awarded the Pritzker Architecture Prize,  considered the most prestigious architecture award for the Cathedral in1988. His intention for the cathedral was for it not be gloomy and he succeeded. The light filled building soars to heaven. 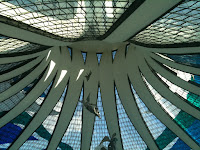 I was surprised at how clearly under utilised the cathedral is for the main church in the capital city of a predominantly Catholic country. There are very few pews in it, for example.The day I was there, they were preparing for a wedding. There were decorated pews and a mirrored walkway reflecting the sky. 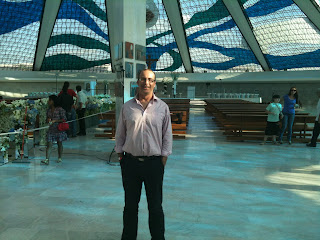 Brazil’s National Congress Building almost at the end of the Monumental Axis looks very similar to the UN Building in New York City. 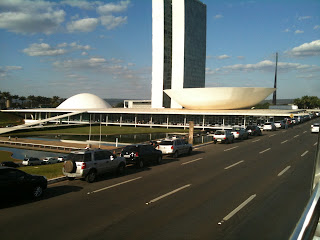 The semi-sphere on the left is the seat of the Senate. Currently, the Senate comprises 81 seats with three Senators from each of Brazil’s 26 states and the Federal District. Senators serve eight-year terms.

The semi-sphere on the right is the seat of the Chamber of the Deputies. There are 513 deputies representing their disticrts.

Between them are two vertical office towers for the Congress.

In front of the complex there is a large lawn -used predominantly for demonstrations and a reflecting pool. 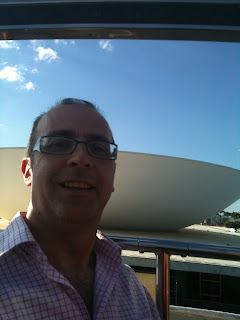 Behind the congress is the Praça dos Três Poderes (Three Powers Square). Three Powers Square is where the Monumental Axis finishes. This is Ground Zero for Brasilia. The buildings representing and housing the three powers that “rule” Brazil were the reason why the entire city was planned and built.. The other two Powers are represented by the President’s Palace (Palácio do Planalto) and the Supremo Tribunal Federal.

I didn’t like the Square. It felt too sterile, too barren and too large. To me, it makes the three buildings which are all great buildings feel distant and forbidding. I also would have thought having these buildings closer down toward the lake would have been a more pleasant backdrop. This would have meant orienting the city further east.

There were many people there on the day I visited but the square felt empty. 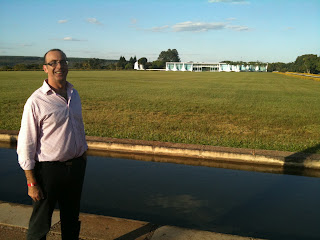 One building in Brasilia that is near the lake is the President’s Residence: Place of the Dawn which is built on a Peninsula jutting into this artificial lake.

What made the President’s Palace fun this visit were the school kids trying to make the Presidential Guardsman react. Like their London counterparts, the guardsmen who protect the President stand unsmiling and almost unblinking.

The Palace was finished in 1958 before the City was opened. It has since been thoroughly renovated. 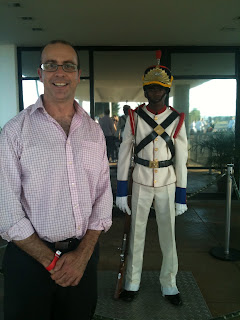 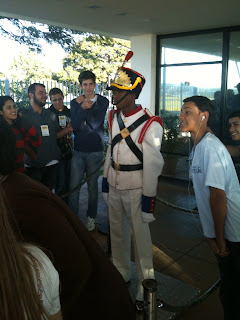 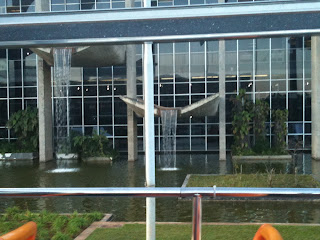 The Palace of Justice is made more attractive with the addition of flowing waterfalls along the front. It stands opposite the Foreign Affairs Ministry which has a lovely reflective pool out the front.
We went past the National Library which again looks good but looks lost in a barren concrete landscape and the Cultural Centre which looked lifeless. In a nation with such an exuberant culture, it could have looked much more alive.

Niemeyer also designed the first building at the University of Brasília and the first hotel both of which I didn’t have time to see.
His latest project (at the age of 103) is Digital Television Tower which should be opened sometime this year. It looks amazing!